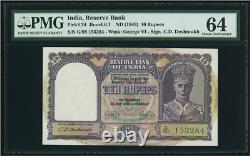 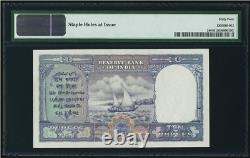 Some information about this remarkable note: The Obverse shows His Majesty King George VI, (Albert Frederick Arthur George, 14 December 1895, York Cottage, Sandringham House, Norfolk, United Kingdom - 6 February 1952, Sandringham House, Norfolk) was King of the United Kingdom and the Dominions of the British Commonwealth from 11 December 1936 until his death. He was the last Emperor of India and the first Head of the Commonwealth. Until 1947 the Emperor of India. The Obverse's engraving was probably from a photo shoot made on Coronation Day in 1937.

Edward's Crown, one of the oldest of British Crown Jewels and is considered the principal piece of the Regalia. The Reverse shows the note's denomination in seven languages (in words) on the left. In the center is a picture of a two-masted, three-sail cargo-laden boat, with mountains to the left and clouds above.

On the right is a watermark for His Majesty King George VI. On the right and left sides are palm trees. Bottom Center is the Seal of the Indian Reserve Bank. Incredibly beautiful sample for the discerning collector!

India Reserve Bank of, 10 Rupees 1943 Jhun4.6.1 Pick 24 UNIQUE SCARCE" is in sale since Tuesday, October 17, 2017. This item is in the category "Coins & Paper Money\Paper Money\ World\Asia\India". The seller is "legacytreasures" and is located in United States.