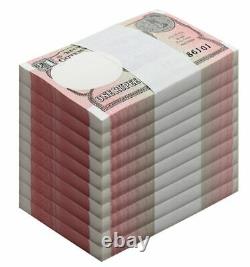 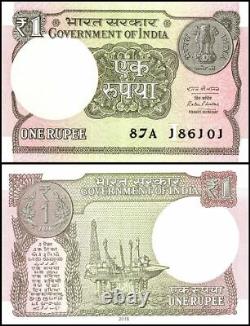 The pink and green Indian rupee note was reissued by the Government of India from 2015 to 2018 to supplement small change needs. This note is in uncirculated condition, dated 2016, and signed by Ratan P.

Its front side shows the front side of the 1 rupee coin with the lion capital of Ashoka pillar. Its backside shows the back side of the 1 rupee coin with flowers, the rupee symbol, and the date, the Sagar Samrat oil exploration platform, and the 15 language panel. Though the note does not have a security thread, it has an Ashoka pillar watermark. Its dimensions are 97 mm by 63 mm.

The seller is "banknoteworld" and is located in this country: US. This item can be shipped worldwide.